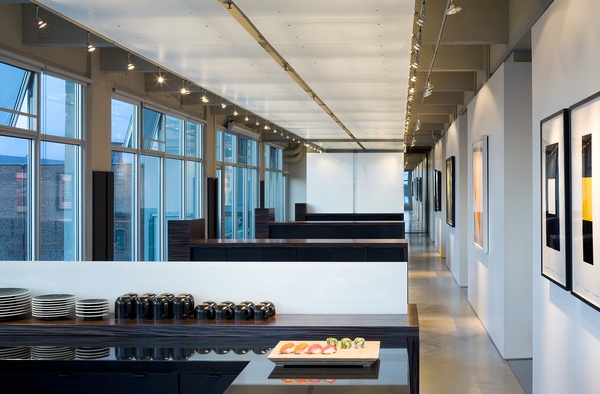 This 2,700 square foot loft apartment in downtown Des Moines was designed for a single doctor interested in fine art and urban living. Organizationally, the loft was conceived as a simple, linear volume containing the major public spaces (kitchen, dining, living, media, and bedroom) served by a series of smaller, more private spaces (laundry, master bath, office, powder room, pantry, and guest bath). The public spaces were placed adjacent to the building’s exterior, providing each with sweeping views of the city skyline to the north and west, while the private spaces were placed next to the building’s core and separated from the main volume by a thick gallery wall.  This plan arrangement provides the owner with a variety of spatial opportunities including the expansive, open volume one comes to expect from loft living; more intimate, contemplative rooms;  and “in-between” spaces.

A reductive tact was taken throughout.  Mechanical systems were removed from the large volume and concealed above the ceiling of the private, core spaces to eliminate the resulting clutter. A ribbon of translucent panels both delineates the open volume and integrates lighting and sprinkler systems creating a simplified ceiling plane. Even exposed door and cabinet hardware was minimized or eliminated where possible.  The result is a raw, industrial space which contains a small set of highly finished, minimal objects which define the domestic program for the owner.