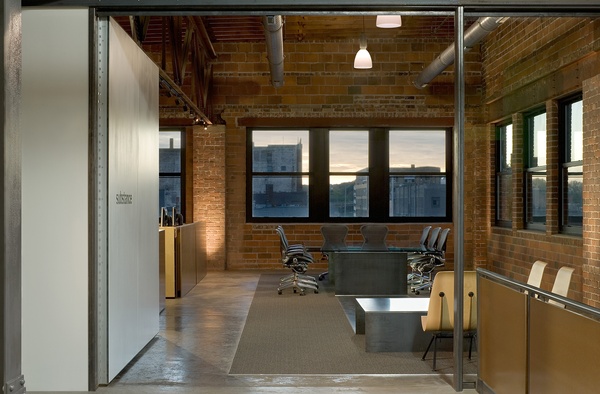 Our studio occupies the second floor of a loft building in Des Moines, Iowa. The original space was powerful—with steel trusses forming a grand, column-free space. The design maintains and enhances the space in two zones: an open studio space along the exterior and a linear service space along the opaque interior edge, separated by a wall of display shelving and storage cabinets.

Our collaborative philosophy informs nearly every detail. Workstations at 36 inches (rather than the typical 29 inches) encourage discourse between staff. Work pods are organized around teaming tables. Finally, the entire studio is open—allowing us to share our collective knowledge. The casework was conceived as a ribbon of Baltic birch plywood folded and wrapped around a team table of folded steel plate table. These "origami" objects weave the studio and service zones together. This composition was then repeated, creating a cadence corresponding to the structural order.