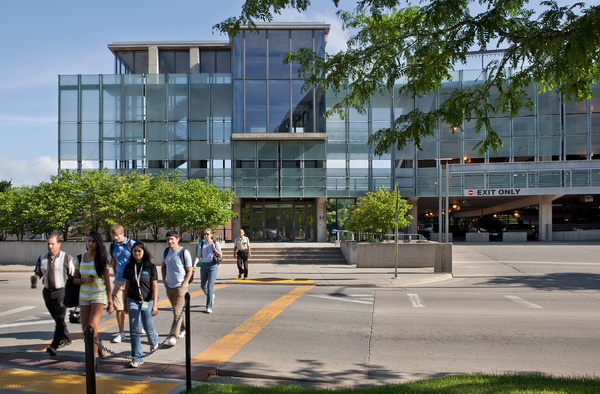 This parking structure serves the University of Iowa's medical campus. The parking box is simplified, the non-parking elements are pulled outside the structure, and the box is clad to deemphasize the cars. At nearly 450 feet long, the length is attenuated as a long fritted glass plane, following the form of the adjacent road. The ending points are stairs, diaphanous volumes you are encouraged to see.

On the opposite side, a 5,000 ton chilled water facility and its two large cooling towers face the adjacent highway in front of a 400-foot long perforated copper screen. The towers demand attention, making the garage a simple backdrop at the scale of the highway traffic.

The project follows the original definition of a parking garage, efficient and enclosed. By keeping the strategy simple and focusing on refinement of the details, the result is the friendliest of neighbors.